Posted on August 8, 2016 by frankiesanjana

Having not really dared to plan anything based on what my body might still be able to do After The Ironman, I was slightly bewildered to find myself still in one piece at the end of June, back training normally a couple of weeks after the event, and needing to choose some races for the second half of the season. We’d had a great time in Denmark in June, so another race run by Challenge, and very close to where we’d raced previously, seemed like a good choice.

After spending July mostly keeping my swim and bike ticking over but running round the local park like a lunatic in a bid to gain some run speed, we headed to Fredericia a few days before the race, giving ourselves time to settle in and check out the course well before race day. 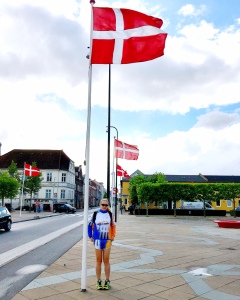 Outside transition a few days before the race, during a rare gap in the rain

Investigating the course turned out to be an experience in itself! With dolphins (and other, rather less welcome creatures) roaming around the swim course, rain that had the bike route virtually under water at times, and my visor blowing away as I went for an easy jog round the first part of the run section, race day looked set to be an interesting experience. 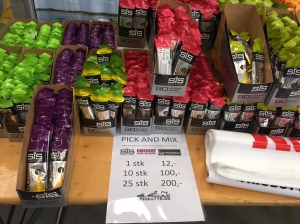 Race start on Saturday wasn’t until 3pm – the trick seemed to be to fill the morning with just enough activity that nerves couldn’t set in too much. A lie in, quick pre-race swim and “race morning breakfast” at lunchtime occupied the time, and for a start so late in the day, it rolled around surprisingly quickly.

I’d spent most of the week trying to get my head round the swim full of jellyfish, knowing the real risk was that I would panic, rather than any damage caused by the jellyfish themselves…. Thanks to Yvonne for letting me stick with her during the warm up, and magically managing to calm me down in a few words when I first saw one of the stinging kind and freaked out a bit!

Somehow, when the gun went off, I stuck my head down and got on with it, taking it one stroke at a time and managing not to panic. It helped that another girl was swimming right next to me for the first section along a canal, and once out into the more open section in the harbour, the rough water and concentrating on sighting diverted enough of my attention to keep panic at bay.

Athletes swim 2 loops once they’re into the harbour section, and towards the end of the first loop I did jump a bit seeing something large and grey swooshing underneath me – but how very cool to see the dolphin during the swim! Starting out on the second loop I merged into the mass of age groupers who’d started 5 minutes behind us, trying my best not to accidentally smack any of them on the way past. Again, dodging round people and trying not to get a mouthful of the choppy sea kept my thoughts off the jellyfish, and soon enough I was out of the water.

As an added bonus, the number on my watch even started with 27 as I came into T1. A huge PB, possibly a slightly short course, but given how “busy” it was in there, I am still pretty happy!

Thankfully the weather gods were kind to us during the bike, and I didn’t have to test out my newly-found carbon-braking-in-the-wet skills on the twisty descents. The wind was strong and gusty, but every time a gust shoved me across the road I gripped on tight to the aero bars and remembered that wind + disc = a big push forwards! The only place this didn’t work was going across the Old Little Belt bridge, with a rough road surface and very strong side winds, where the base bar seemed like a safer place to be…

After all my mental (thankfully not physical) wrangling with the jellyfish, I was speeding down a hill back into town at the end of the first of 2 bike loops when I felt something fly into one of the side panels of my helmet and get stuck, buzzing around the side of my face. After smacking it a couple of times, there was no more buzzing, but instead a painful sting on my cheek. Actually really pleased to have got a wasp stuck in my helmet, as it is something I have long been terrified of, and now it’s happened and no one died (apart from the wasp…) I will be less scared of it happening again!

Unfortunately I managed to miss the single aid station on the bike course, which is a few metres before transition, just round a corner, before heading back out onto the second loop. However, I did see Ed, who told me I had moved into 5th place without realising it… Now used to the corners and the wind, I managed to ride the second loop slightly faster than the first and hold my position, but rolled into T2 feeling slightly cooked after not drinking enough on the bike.

Having checked out the run course profile on the website, which claimed that it had a whole zero metres of climbing, it was a bit of a shock to find that other than the section I’d jogged before the race, it was almost entirely either uphill or downhill. Still, a leg of the course with no wildlife to deal with was to be appreciated, and I could feel a huge improvement in my running from the last couple of months’ training.

Although I lost one place on the run, it seemed to progress surprisingly quickly, and before I knew it I was coming into my last lap. Hearing that I had “3 or 4 minutes” on age-groupers behind me, I took off like a scalded cat… not used to my newly improved run fitness, I’d clearly gone out a bit conservatively, given the step up I was able to make at that point! Better than the huge slowdown in the run of my previous race, although with less than 4 minutes between me and 4th place, it’s annoying to know I might have been able to go faster.

Sprinting to the line

Overall this was a great race, with an exciting course and great atmosphere – definitely one to come back to!

Next stop is Ironman 70.3 Dublin next weekend, where I will find out how my body responds to racing back-to-back weekends. Rumour has it they’re even sweeping out the jellyfish… luxury!