Having finally managed to stay in one piece for long enough to do the training for an iron distance race, it was time to put it to the test! I chose Challenge Denmark months ago, looking for a race whose course and likely conditions would suit me, and was excited and not a little surprised when I actually made it to the start line in one piece. Unlike my equipment…. but I’m getting ahead of myself.

One of the positives of living in Amsterdam is the ability to travel to European races without having to cross a large chunk of water, and so, instead of flying, on the Tuesday of race week Ed and I bundled an incredible amount of kit into a hire car and set off to drive through Germany and into Denmark.

Incidentally, stopping for lunch in Germany and speaking German again when you’ve been learning Dutch for a year = Mind. Blown. Amazingly I actually managed to make myself understood!

We arrived after a long day’s drive to our first ever homestay at a race – I was pretty nervous about it and didn’t really know what to expect. I needn’t have worried – our hosts Annette and Michael were absolutely lovely, and welcomed us into their home like family. I’m amazed and very, very grateful that people are willing to have athletes to stay with them for the races!

Race week proceeded as planned, with the usual mixture of bike rides, ridiculously short run sessions, a dip in the lake and inadvertently breaking the rules of foreign swimming pools (because using my snorkel is DEFINITELY a hazard to other swimmers….) 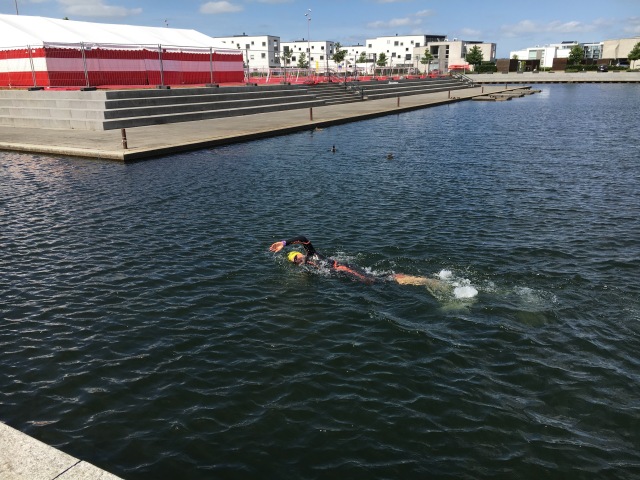 Pre-race swim in the lake

The day before the race, I went for a final spin, then we headed over to T1 for one last swim before racking my bike and bags and heading home for an early dinner and a good night’s sleep.

As I came out of the water after a good swim, I could see Ed walking towards me; from his demeanour something was obviously Very Wrong. Half expecting to be told one of our family members had been seriously hurt, it was a relief when it turned out all that had happened was that my bike had developed a crack in the base bar that made it unusable. Somehow. Since Ed had checked it the day before and my ride that morning had passed without incident, I was perplexed to say the least.

Out of my wetsuit and into normal clothes in a time to shame many of my previous attempts at T1, we were onto Google and heading to a bike shop down the road in record time…. except it was closed on Saturday afternoons. And so was the other one in town. We headed back to transition, hoping there would be some sort of extra special mechanical support there that could magically solve the problem.

As it happened, there kind of was….

We brought All The Tools with us. Just sadly not a whole spare bike

We owe a LOT of thanks to the race mechanics from Triudstyr for coming up with a solution! It involved

Check out my duct tape top cap as I head out of T1 wondering whether my bike will disintegrate during the ride! Hashtag Marginal Gains 😉

After all too short a time at home and about 3 hours’ sleep, we headed back to T1, racked the beast at last and then headed over to the warm up area. Very impressed with the race organisers for providing an in-water warm up – at least, I really appreciated it, though didn’t see any other athletes using it!

Warming up before the start

I’d already decided to make the most of where I was: even if the bike bodge didn’t work, I still had a shot at the swim. If it and I arrived safely into T2, no matter how slowly, I still had a crack at finishing an ironman for the first time in over 2 years.

The swim passed without incident for the first 400m. Then we turned left round the first buoy into the rising sun. My goggles were dark, but not dark enough; with the glare on the water I couldn’t make out any of the buoys, nor any of the sighting points on shore I’d carefully noted before the race, and had to rely on the other athletes to sight off. Not ideal. Despite swimming well, I sighted atrociously, and must have added minutes to my swim time. Lesson learned!

Somehow I still left T1 in second place and – somewhat apprehensively – headed out on the bike. It took about 15 minutes for third place to pass me – on the flat, and she went by as if I was standing still. I looked down. 216 watts, bang on target. I told myself either she’d blow up, or there was something still wrong with my bike, or she was just stronger than me and there was nothing I could do about it.

I stuck perfectly to my nutrition and pacing plan, eating and drinking every 20 minutes and riding consistently at exactly the power I’d planned. I guess there still was something wrong with the bike – I rode much more strongly and consistently than usual but still lost much more time to my competitors than in previous races. However the bike did, as hoped, get me to T2 without further incident, so now “all” I had to contend with was the marathon.

The run course consisted of six loops, and our supporters were allowed to give us food and drink at a designated point on the loop. So the six communications went something like this…

My best “I love my job” face

Game face back on

My first pro podium! Congratulations to Mirjam and Anne

Thanks to everyone at Challenge Denmark for a fantastic race!

This entry was posted in Uncategorized. Bookmark the permalink.