Posted on February 1, 2014 by frankiesanjana

…I welcomed the opportunity to leave the UK for a couple of weeks and practise some other aspects of training.  Sea swimming, TT bike handling on dry, fast roads and transition practice are all next to impossible to replicate at home at this time of year, and with Ironman South Africa creeping ever closer, Ed and I planned a trip to Lanzarote for two weeks over the Christmas break to try and fill these gaps in my experience before the race.

Whenever we travel for training or racing, I spend hours researching where to stay, the cheapest (and bike-friendliest) flights, and local swim, bike and run routes.  We’d stayed at Club La Santa before and found it much more expensive than we’d expected, and being keen to fit some sea swimming in meant that staying on the south side of the island would be preferable.

Hours of searching later, I seemed to be drawing a blank but eventually stumbled across the Tri-Sports Lanzarote website.  It sounded too good to be true!   A few emails revealed that it wasn’t, and we were quickly booked in for 2 weeks in a dedicated training facility, complete with secure bike storage, a 25m pool and regular trips to swim on the Ironman Lanzarote sea swim course – perfect!

After some deliberation, we both also booked on to an organised training week that was being run out of Tri-Sports Lanzarote by professional triathletes Yvonne van Vlerken and Per Bittner.  I was more than a little worried that the camp would be entirely made up of scarily fast “elite amateur” men and that I would be far too slow, but as Ed pointed out, at least if that happened we would both be left behind together.

Nerves about whether I was fast enough were combined with my fear of descending on the bike and slight reservations about whether I was sociable enough to spend two weeks living with an ever-changing group of people who I’d never met before.  I was definitely looking forward to going, but not at all sure what to expect.

It turned out I needn’t have worried.  Being met at the airport was a great start, after the memories of our taxi’s rip-off extra fares for carrying bikes the previous year, and once we’d arrived at the villa we were introduced to the team: Daz and Debs, who have been running Tri-Sports Lanzarote for a few years now, and Nick, who helps them out – and makes the best hummus any of us have ever tasted!

After a fantastic lunch, we built our bikes and headed off for a test ride, before stretching, unpacking, an early dinner and bed – we’d woken up at 4am so were somewhat short on sleep…

The next day we set off for a ride in a small group.  It turned out that my worries about not being quick enough were unfounded and we had great fun riding up mountains, if slightly less fun on my part wearing out the brake pads on the way back down – but that was what I’d come here to practise.

The view from the top of Haria 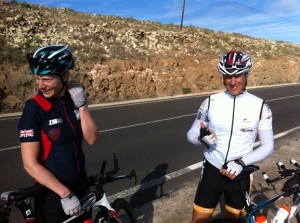 I think my incredulous expression is because I’ve realised that now it’s time to go all the way back down on the bike too… Daz may be looking happy for the same reason?

We spent the next few days swimming in the sea, covering plenty of miles on the bike but keeping run volumes down to avoid injury, adding in some strength work, stretching and physio sessions to support the battering our bodies were taking.

Despite my aversion to Christmas-related hype, I should also mention the best Christmas we’ve ever had!  The day started with a group trip to the beach and a few km of swimming in the glassiest conditions I’ve ever seen.  We then headed back to the villa for a delicious Christmas breakfast and in my case a few mile repeats to work up an appetite for lunch.

I have never managed to look glamorous or to cook Christmas dinner. Debs does both at the same time, and makes it look easy!

Christmas lunch was stunning, and a gloriously peaceful afternoon of good company and exchanging presents followed.  My highlight has to be my very own Tri-Sports Lanzarote mug – pictured here in the esteemed company of Dan Hawksworth’s and Cat Morrison’s:

Yvonne and Per’s organised camp started a couple of days after Christmas, and brought with it an influx of new people staying at the villa.  Again I was worried I’d be so slow on the bike the group would be stopping to wait for me; in fact, I was embarrassed to find my natural speed was actually much too fast to ride comfortably with the others.

The camp was, in any case, cleverly structured so that different speeds wouldn’t be a problem.  On some days we split into several smaller groups, and on one day I discovered a new “fun” (read “extremely tough” session): 10km on the bike followed by 2km run.  Four times.  As fast as you can.

The camp as a whole was great: exceptionally well organised, and designed so that everyone got the most out of every session.  I learnt a lot from the week: some new sessions, strength exercises and effective ways of stretching, as well as plenty of technical points to keep in mind now I’m home.

My highlights were discovering that I was so much stronger than I’d thought on the bike, and coming second in a 5k running race that we all took part in on New Year’s Eve.  I’d never run a 5k before and had no idea how I would get on – it only occurred to me shortly after the turnaround that Yvonne was the only woman I’d spotted coming back past me in the other direction…

Podium place, accompanied by an irrelevantly large trophy and a €60 voucher to spend in the SPAR supermarket – a happy new year indeed

Prize of the day, however, goes to George, who won a ham in the raffle after the race!

We had a couple of days left after the end of the official camp before we had to return to home and work – after a lighter day on Friday, we mustered up the energy for over 5 hours on the bike on Saturday, including some hill repeats up the Tabayesco climb, as well as the one part of the Ironman bike course I had yet to tackle…

Pretty tired by the last day, I considered taking it easy… but that wouldn’t be very “me”.  A shorter 3.5 hour ride with some intervals, bike packing and one last swim were squeezed in before heading off to the airport.

We returned home absolutely shattered but having completed a huge volume of training, addressed the various aspects of training that I couldn’t work on in the UK winter and, somehow, lost some weight.  More importantly it was the most fun training camp I’ve ever had, and I can’t wait for next time!