Kona Part 2: a humbling day out

Posted on December 11, 2013 by frankiesanjana

Despite the gaps in my preparation, I was still reasonably confident that I could pull off a respectable race.  I’d trained hard all year and I’d won my age group by more than 15 minutes to qualify, so surely I deserved to be here?  I was also buoyed by a decent result in Vegas 70.3 Worlds five weeks earlier, even though I’d been training for full iron distance all year and had raced with a cold. 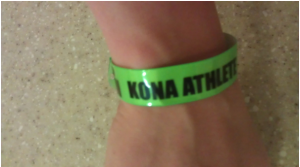 I had a slight altercation with the volunteer doing my body marking over the application of sunscreen when she told me not to put any on until T1, which is WTC’s official policy on the matter.  Not getting skin cancer seems a little more important somehow, and the issue of the numbers coming off could be very easily solved by allowing athletes to apply their own transfers the night before, as is done in Ironman UK.

Otherwise, race morning went smoothly, and before I knew it I was in the water, waiting for the gun.  I’d positioned myself 3 rows back from the front and towards the left of the mass of age groupers, hoping for a reasonable start – surely at Kona people would be more focused on their swimming than on punching me in the head?

Happily this proved mostly true.  Even the delightful tactic of grabbing hold of people’s legs to lever oneself past them was more smoothly executed than normal, although to my disappointment this made it more difficult to block by judicious use of kicking!

Dig Me beach (where we enter the swim) – ok, so this wasn’t actually taken on race day. I was a bit busy…

To my shock, I was immediately being passed on the bike.  I’m used to having a good but unremarkable swim, and then gradually clawing my way back through the field on the bike.  As it turns out, I was, just more slowly than usual… Oh well, I told myself, you’re racing with the big kids now, best just get on with it!

There’s no way around it: I felt like shit on that bike course. Whether I hadn’t trained hard enough (doubtful), hadn’t acclimatised fully to the heat or the time difference (probable) or was just exhausted at the end of a long season (highly likely), it was not going to be my most stellar performance of all time.  I couldn’t shake the feeling that it was the middle of the night, and resolved just to get round and try to enjoy the race as much as possible in the process.

On my way up to Hawi I was watching for the racers ahead coming back the other way.  I saw the male pros, remember spotting Leanda Cave somewhere near the front of the women’s bike race, and then, to my lasting disappointment, began to see huge drafting packs of age groupers, with maybe up to 40 riders in some of them, coming the other way.  I didn’t see a lot going on to stop it.

As it turned out, I’d been doing OK up until the turnaround.  Around the time I reached Hawi the wind started to pick up, and as I rejoined the Queen K, I was really starting to suffer.  I’d naively worn my lovely Giro Air Attack Shield helmet, which had served me so well in Ironman UK.  But firstly the visor had fogged up and I spent the whole ride squinting; and secondly, it was not very well vented, and was stopping my body from losing heat.

I also wore a Castelli top over my trisuit that was designed to act as a skinsuit, reducing drag and keeping the sun off my shoulders.  Both this and the helmet were excellent kit that in different conditions, and probably even in these conditions on a different athlete, would work extremely well.  However for me, on this particular day, I thought afterwards that I should have chosen different kit to maximise heat loss.

Add to that the fact that, at 168 pounds (76.2 kg) on race morning, I was very much what they politely term a “larger athlete”, and that my one foray into the sauna in an attempt to acclimatise back in the UK had been swiftly aborted when it pushed my infection-ridden body to the point where I had almost fainted, and you’ll see why I was struggling in the hot and humid conditions.

I was up on the base bar by this point: getting into the aero position put just that little bit too much pressure on my stomach and I was trying hard not to be sick.  I certainly wasn’t in a state to take on any nutrition other than water.  For about an hour, the only reason I was still pedalling was to get myself back to T2, some shade and a medical tent as quickly as possible.  I had no intention of finishing the race.

I decided that the best way to simulate the conditions in which I found myself back in the UK would involve a turbo trainer, the central heating and a fleet of hairdryers, installed directly in front of me and blowing relentlessly into my face, into my eyes, into my throat…  So if I am lucky enough to qualify again in 2014, that’s what I’ll have to look forward to!

Around half an hour before T2 my mood lifted slightly.  I’d managed to force down a salt stick, which I think had helped, and figured I might as well get through T2 and out onto the run course and see what happened.  I avoided that medical tent though; I was scared they’d pull me out of the race if they saw the state I was in.

I saw Ed just before I went into T2 and, rather too long later, just after I came out.  He’d been getting very worried!  I had walked round the pier rather than running, sat down and dried my feet carefully, been slathered in sunscreen and generally taken my time to make sure I started the run in as good shape as I could manage.

When I saw him I was delighted: no longer on the bike, I was able to stop for a hug and some encouragement before walking up the hill of Palani Road and then gingerly starting to jog as I reached the flatter Ali’i Drive a couple of hundred metres later.

Given that due to injury it was the first time I’d run in five weeks…. it didn’t go so badly.  I ran / walked the first half of the marathon, with quite a bit of walking to keep my core temperature down.  I saw several people vomiting into the bushes on the run course and I was keen not to join them.

At around the half way point my legs began to seize up.  At this point I had a choice to make.  I could keep running (or, more accurately, stumbling) along and do my best to salvage my time.  Or, bearing in mind my recent injury, and desperately wanting to avoid carrying an injury into the 2014 season, I could ditch my ego and walk the rest of the marathon.

I walked.  I think it was the right decision.  Six weeks later I am uninjured and running faster than I ever have before, but that’s a story for another day.  I don’t know that it would have made much difference to my eventual time if I’d kept trying to run in any case.

It’s dark and lonely out there when night falls, without much street lighting and no spectators allowed beyond mile 13 until you come back into Kona.  I pinned on my lights and grabbed a couple of glow sticks, making sure I was as visible as possible to the few race vehicles that were out, and trudged on through the pain and boredom.  Even my walking was slow by this point.

I chatted to another guy who’d been struggling with the conditions on the way back into town.  He was good company and it helped to pass the time.  When we finally reached Palani he started to run for the finish and I thought I’d better go with him…. he wasn’t able to run for long, but cheerfully waved at me to keep going!

Spotting one of the competitors in front of me pushing a volunteer out of his way quite nastily at an aid station, I saw red and decided that for this his lasting memory of Kona should be being outsprinted to the line…..  I went flying round and down and along and finally to the red carpet, passing him easily, and a couple more people in the process.

Crossing the line, some hours later than I’d hoped! [Photo from the Livestream event broadcast]

Everything became a bit of a blur.  I remember seeing the race clock ticking, pushing into my final sprint for the line, a lei round my neck, finding Ed, who’d been volunteering and hoping to catch me, but had just missed me.  An officious American lady telling him despite the fact he was a volunteer in a volunteer area and I needed support that he couldn’t come with me to pick up my finisher bag.  A lovely German lady letting him go and pick up my bike and transition bags for me, despite the fact he wasn’t supposed to.

We dragged me and my copious amounts of Stuff to the car and headed home, along a back route that Ed had scoped out earlier in the day to avoid the road closures.  The only place still open was a petrol station, so my celebratory dinner involved a ready meal and half a pizza.  Fatigue, disappointment and relief that I’d finished both the race and the season washed over me, and I slept much better than on a normal post-Ironman restless night.

For post-race travels and holiday, see here.  For the week leading into Kona and my preparations (or lack thereof), go here.