Posted on December 9, 2013 by frankiesanjana

This was rapidly rebadged as my A race of the 2013 season following a nightmare race in Texas back in May.  I was desperate to see how fast I could go and whether I could get my hands on the Kona slot that had been my motivation throughout the freezing winter!

We stayed at the Reebok Premier Inn in Bolton, I found the stadium (hard to miss!) and a retail centre nearby with Costa and Asda, as well as restaurants and a cinema.

Once in, I unpacked everything, including Ed’s bike and heavier bits of kit – he was finishing a project at work and had to travel up later, eventually arriving exhausted on Friday morning.

And this, ladies and gentlemen, is the love of my life. Hat, WTC; sunglasses, Oakley; fashion sense, model’s own

…driving the course (highly recommended if you’ve not had time to cycle it, though rumour has it the course will change in 2014 in any case)…

…and of course driving round putting bags and bikes in all the right places, as the start and T1 are at Pennington Flash, T2 is in Rivington and the finish line is in Bolton town centre.  A logistical nightmare (leave plenty of time for traffic…) but I love the feeling that you are going somewhere rather than just racing back to where you start from!

IMUK starts at 6am so it was a 3am alarm call on race day.  The hotel had laid on a buffet breakfast and porridge, so at least there was variety in the carbs I forced down.  I hate eating food that I don’t enjoy (and at 3 o’clock in the morning I don’t enjoy anything much) but it has to be done.

The coach journey down to the start went smoothly and everything was fine in transition – having not mastered the art of riding a TT bike yet I was racing on my bright blue Planet X road bike, which at least meant I would be comfortable!

I left Ed as we got into the water: unsure whether I had too much faith in my own ability, I had nevertheless decided I was fast and should start near the front!  The swim was both murky and dazzling as the early morning drizzle disappeared to leave a blinding sunrise on the way back to shore.

Coming out of the first of two swim loops, I was amazed to see 00:30:10 on the clock….”that’s great, and I’ll definitely go faster on the second lap now I’m warmed up!”  I didn’t though, as the second lap was slightly longer, but was still much quicker than I’d anticipated out of the water, in 1:02:34.

Running into T1 I heard Paul Kaye’s voice over the mic telling the world I was gunning for a Hawaii slot, shouted “Thanks Paul!” before my brain caught up with me and I realised there was no way he could hear me…. oh well.

T1 was quick (for me) and I was out on the bike before I knew it, settling into a rhythm and  getting my heart rate back to target.  Had to dodge some wobbly cyclists and dropped bottles on the access road out of T1, but was soon onto the main road.

This part of the course is slightly uphill but the “tail” up to where the 3 loop circuit starts was still my highest average speed on the bike course – once Sheep House Lane had put a dent in it, it never really recovered!

My beloved road bike! I raced mostly on the drops – no tri bars

The memory of the bike course that stands out the most, however, wasn’t SHL itself but the amazing support, from the cheering and cowbells to the wonderfully dry sense of humour evidenced by some of the signs.  It makes such a difference and I’m very grateful to everyone who came out to support, especially the crew at the top of SHL (you know who you are!).

I also saw Ed walking on the bike course near the end of my second loop – he’d had to pull out of the race having suffered multiple punctures.  Thankfully he was able to let me know he was OK on my way past.

As I came into T2 with around 7 hours total time on the clock, volunteers told me I was in 6th place overall – I was amazed!  A quick change of shoes and I was off, clutching a water bottle and some bags of Jelly Babies that I later accepted I was never going to eat and chucked out at an aid station.

The first hour or so of the run was very pleasant: it starts with a welcome downhill and then takes a scenic route along a canal.  There’s no support, but hopefully you’re still feeling OK at this stage of the game…

The sharp uphill towards the start of the run loops was where everything started to unravel.  Happily this was also where the majority of spectators had gathered and some much-needed encouragement was provided!  Several people also told me I was leading my age group, and by about the 3rd or 4th I was starting to believe them…

I don’t know why, but my digestive system gave up about half way through the run and everything cramped.  I collapsed into a Portaloo at one point and the whole world seemed to be swaying.  I walked the next mile or so, doubled over with agonising stomach cramps.

Eventually I forced myself to keep running, telling myself through gritted teeth that if I didn’t run now, all those 4-hour turbo sessions over the winter would have been for nothing!

The second half of the marathon was some of the worst pain I’ve ever experienced.  In my former life as a rower I was used to pushing my body through screaming pain for minutes rather than hours.  I ran seemingly forever round those loops, terrified that I would be caught – I’d clocked the girls in 2nd and 3rd place and saw them every time I went past.  My only consolation was that they looked in similar condition to me.

It wasn’t until after the last turnaround, when I’d looked at my watch and measured 8 minutes until I ran past the girl in second as she headed for the turnaround herself, that I really believed I could win.  My brain shifted into “now just don’t screw it up” mode and I kept on running, just concentrating on not tripping over my own feet – my clumsiness means this is far from impossible!

At long, long last I made it to the red carpet, which cruelly bends around away from the line before finally taking you up to the finish arch.  I could hear Joanne’s voice calling me in, though I couldn’t make out what she was saying, and mustered up what passed for a sprint to the line, before collapsing and being unceremoniously dumped into a wheelchair.

I confirmed I’d won my age group and found out I had come 12th overall – not bad for a novice, although obviously I was grumpy that I hadn’t gone faster…

Having scorned the provision of pizza in the finish tent prior to the race on the basis that it wasn’t healthy recovery food, I was obviously not to be found, five minutes later, scoffing as much of the stuff as I could fit into my mouth, while wurbling at Ed alternately between mouthfuls “I won?!?!?” and “Yaaaaaaaay Kona!”, with the occasional “er, can we afford to go to Kona?” that must cross most qualifiers’ minds.

The rest of the day is unsurprisingly a bit of a haze, mostly involving collecting bikes and bags and not being able to finish my dinner.  Ed had taken advantage of his DNF to inform the world how I was doing via social media – I loved the response, but there were more messages than I could possibly reply to in my broken state in one evening.

Then, this being the UK, we drove 230 miles home in the kind of rain that’s so heavy it washes away cyclists, dogs and small children, gleefully plotting our trip to Kona and stopping every now and again for another celebratory coffee and cake. 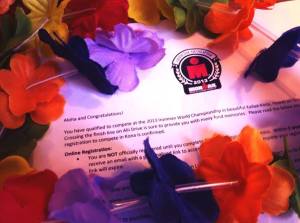 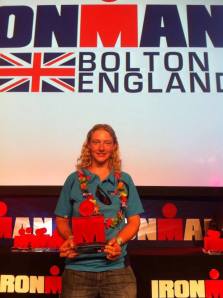 Excellent trophy. Totally proportional to the magnitude of the achievement. TOTALLY.