Posted on November 25, 2013 by frankiesanjana

Note: This was written as more of a “note to self, or others who are interested in racing Ironman Texas” before I had thought of writing a blog.  It is included here for interest and completeness’ sake.  For now I’ve stuck a few pictures in, and may one day get round to updating the style of the text so that it fits in better with the rest of the blog!

First Ironman – chose Texas as it was early season and flat

Rented pickup truck from Enterprise at airport – needed something big enough for 2 bike boxes plus luggage. NB price quoted for car rental in Texas does not include ANY insurance – you have to buy each of third party, own insurance, medical insurance and breakdown cover separately.  We bought all bar medical insurance (travel insurance covered this) plus 1 tank of petrol prepaid, plus $10 / day for a second driver, and it came to $1,350 for 9 days.

Stayed here http://www.vrbo.com/346118 V nice, would recommend. Not cheap but nice to have own cooking facilities and more space than you’d get in a hotel.

This place does great breakfasts and ok other meals (menu on website, lots of free parking) http://www.blackwalnutcafe.com/woodlands.html

Houston Zoo is not too far away, quite small but good for kids (and big kids)… We particularly enjoyed the sealions! 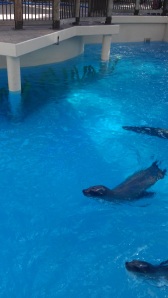 Bought groceries at HEB in the Woodlands on Market Street, reasonable amount of parking though busy at weekends.  Also on Market Street is a shop called Luke’s Locker which sells running kit and nutrition.  Staff were really helpful and answered all sorts of queries like where to swim, where to buy a ridiculous Texan cowboy hat, etc. without batting an eyelid! http://www.lukeslocker.com/company/locations/Woodlands/

The race guide suggests swimming at a pool that is only open 7.30pm-8.30pm in race week – we swam instead at the CISD Natatorium which is open 9-1 Mon-Fri and is amazing – 50m pool, very clean and I think we had a lane to ourselves every time we went swimming.  $6 a swim, lots of free parking. Website down at time of writing but should be back at http://athletics.conroeisd.net/aquatics/

Went to this bike store for CO2s, bento box and other bike supplies http://www.bikelandusa.com/

Silly hat and boots. It was some months after the race before my feet were in good enough condition to wear the boots again…

We couldn’t safely cycle far out of where we were staying – roads were 3 lanes and more akin to a motorway in the UK.  Instead drove out to about mile 20 on the course and rode out from there which was fine – though drivers are still less aware of bikes than in the UK.

Race registration was straightforward and there are plenty of stash opportunities at the expo.  Pre-race briefing on Thursday was very hard to hear and it was only there we found out the race would NOT be closed roads although junctions would be marshalled.  There was quite a bit of traffic on the course on the day, mostly fine, sometimes slightly scary and I heard one instance of cyclists being run off the road…

Practice swim was uneventful – I tried out both my swim skin and my wetsuit as the water temperature on Friday was 76.0 degrees.  Usually it’s higher by this time of year so you can expect to race in a swim skin if you want to be eligible for AG awards and Kona slots.  On Friday you do appear to be able to park at the swim start though you can’t on race day.

Did one last bike ride then went to rack bike and bags – all straightforward so got this done then headed home to rest, stretch and make up nutrition which went in the fridge overnight.

While in America we’d tried to stay close to UK time, going to bed at 9pm every day, so my usual pre-race inability to sleep til “really late” only had me awake til 11pm.  A 4.15am alarm call on race morning wasn’t tooooo hideous as a result!

Had my usual pre-training breakfast of porridge and bananas then got a lift down to transition where we put nutrition on our bikes, checked the tyres and then headed over to the swim start.  The water temperature was being read out in transition as 77.9 degrees so I left the wetsuit in the car.

Got to the swim start about 6.20.  Body marking was really quick but the loo queue was terrible – 2,500 athletes divided by 30 portaloos = a long wait!  Finally got to the front of the queue at about 6.53, and into the water at 6.56 just in time for the AG start at 7am.  Got myself near but not too near the front and waited…

For the first time ever I actually heard the start gun, loud and clear, and we were off!  Having only done a wave start before I wasn’t sure what to expect from a mass start but it seemed pretty violent.  Chatting to other people later in the day I got the impression others had found it a bit of a punchup too.  Still I seemed to find that whenever people started grabbing my feet I just had to kick hard a couple of times and they stopped bothering me…

I would recommend going quite wide round the first 2 turn buoys – I went close to the first one and lost time as I had to slow down due to sheer number of people in front of me all going at the speed of the slowest.  Did manage to relax for parts of the swim and think about technique and quite enjoyed some of it!  The canal section at the end was busy for some people as it is narrower so there is less space for people to spread out but personally I didn’t find it too bad – I came out of the water in 1:20 which is a fairly average time.

Ran through T1 and a really helpful volunteer helped me get my race belt, helmet , gloves and shoes on, food and drink in.  Volunteers put suncream on you between the change tent and the bike racking but if you burn easily take your own – I burnt badly despite suncream before the race, at T1, T2 and several times during the run.  Grabbed my bike and ran to the mount line, T1 in 4.25.

Got on the bike and headed out of town – I was riding a Planet X road bike which was very unusual – I only saw a very few other road bikes there, and I don’t think any of the others were without aero bars (it’s my first year cycling so haven’t learnt to use them yet).  As expected I was overtaking as soon as I was on the bike and wasn’t too spooked by the traffic.

My ride unfortunately turned into a tale of two halves…. for the first 50 miles I really enjoyed the rolling course, ate and drank to schedule and averaged 36kph without really struggling, right on target.  However at the aid station just after mile 50 another rider ploughed into the back of me – one minute I was reaching out for a water bottle, the next I was lying on the floor screaming…

The volunteers at the aid station were AMAZING – they picked me up, picked my bike up, got the chain back on the bike for me while I got some water down my throat, and saw me back on my way.  My helmet seemed a bit loose and I adjusted it as I rode along, and also noticed some road rash on my elbow and shoulder, but otherwise all seemed OK initially.  I later realised my helmet had been split into two pieces and all that was holding it together was the outer shell and the Velcro lining…

After the crash I felt sick, had a headache and had to dial down the power output to stop myself being sick – I knew if I started throwing up it was game over.  Only managed to eat twice between the crash and T2 as I was feeling increasingly nauseous, and it was a relief when T2 finally came round.  My final bike split was 5.33 – not what I wanted but the best I could do in the circumstances.  With any hope of a Kona slot out the window, I planned to walk the first couple of miles of the marathon and see if my stomach would calm down enough to let me run after that.

I left my shoes on the bike when I handed it to a volunteer and started to run to pick up my run bag.  Big mistake.  Huge.  As I ran from the grass where the bikes were racked onto the ground where the bags were waiting I felt my feet start to burn…

Hopping and swearing, I grabbed my bag and headed into the run tent, changed my shoes and headed out onto the run course, pausing for more suncream and some ice to shove down my top.  The first couple of miles weren’t too bad but I was aching from the crash and the soles of my feet were gradually turning into two massive blisters, so I spent most of the first lap hobbling round with a very odd gait, gritting my teeth and crying.

Eventually I stopped crying and started chatting to other people which helped me get round – every step was agony and the marathon ended up taking me 8 ½ hours – I’m pretty sure it was the slowest marathon of the day.  I considered binning the race several times as I am due to race at ITU LD Worlds on 1st June and wanted to be in a fit state to do that, but I figured the damage had already been done so I may as well press on.  Finally stumbled over the finish line at 10.40pm, finding myself sadly unable to get excited by the whole “YOOOOU AAAAARE AN IRONMAAAAN” thing having fallen so far short of expectations. 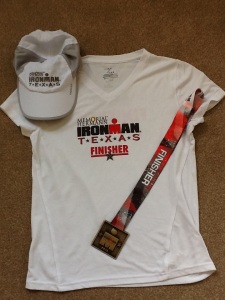 Went home, took socks and shoes off, felt physically sick at state of feet.  Toenails purple and some distance from toes. Slept.  Got on plane (BA dep IAH 2040 Sun arr LHR 1145 Mon).  Feet swelled to twice normal size.  Got pushed through T5 in wheelchair – cabin crew were lovely and very helpful – glad we flew BA.  When we got to baggage reclaim realised someone had accidentally picked up my blue BBA bike box thinking it was theirs and gone home with it. Went home. Cried some more. Slept for 3 days. Now feeling a bit better and it’s even looking like I might not lose the toenails after some careful lancing, draining and bandaging of blisters [they fell off about 4 weeks later…].  Recommend NOT getting a transatlantic flight 24 hours after a hot humid Ironman…